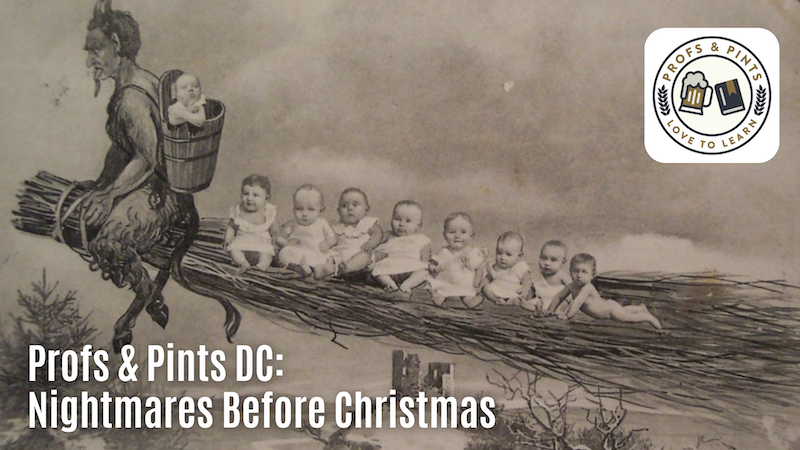 Profs and Pints DC presents: “Nightmares Before Christmas,” a discussion of Krampus and other dark holiday lore, with William Egginton, professor of humanities and director of the Alexander Grass Humanities Institute at Johns Hopkins University.

‘Twas the night before Christmas, and if not a creature was stirring, it might have been because they were cowering under their bed covers, terrified. Come to metrobar for a discussion of the darker lore of the holiday season—the tales that inspire us to search our own souls and worry about the price that we’ll pay for being naughty rather than nice.

The star of the talk will be Krampus, the hairy, horned, demon who accompanies Saint Nicholas in visiting homes in Germany, Austria, and other Central European nations on the eve of the Feast of Saint Nicholas.

Americans happily embraced the kindly Saint Nicholas, who brings toys and chocolates to deserving children, as our own jolly, red-suited Santa Claus. We were less willing, however, to open our homes to the evil Krampus, who lurks behind St. Nick’s white beard and robes and promises punishments to those less deserving of treats. He’s catching on here now, however, as evident by the nation’s growing number of annual Krampus parades, and places like metrobar dc, with its fire pits, are exactly where he feels most at home.

Professor Egginton, a scholar of horror in literature and popular culture, will summon up other frightening figures and dark lore associated with the holiday season. He’ll delve into the pagan roots of Christmas as a solstice ritual and show how its early origins helped give the season a sinister side and inspire traditions such as coal in stockings. He’ll talk about that mean one, Mister Grinch, conjure up the ghosts of Dickens, and explore the growing genre of Christmas horror films. And he’ll also show how thrilling and scary antics often associated with carnival and Halloween have their place in Christmas traditions.

Regardless of whether you’ve been naughty or nice, you’ll have a blast. (Advance tickets: $12. Doors: $15, or $13 with a student ID. Listed time is for doors. Talk starts 30 minutes later.)

Image: A visit from Krampus as depicted on an antique postcard.