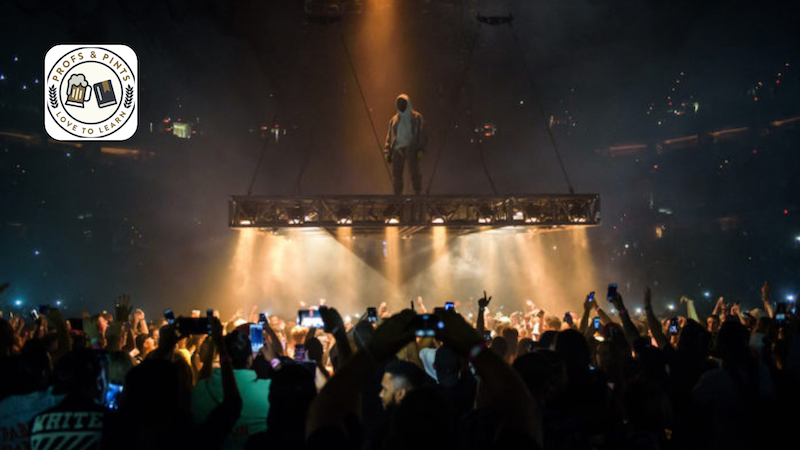 Profs and Pints DC presents: “Let’s Talk about Kanye,” a scholarly look at celebrity and race in America, with Joshua K. Wright, associate professor of history at Trinity Washington University and author of “Wake Up, Mr. West”: Kanye West and the Double Consciousness of Black Celebrity.

Americans are obsessed with celebrities! How many hours a week do we devote to following our favorite celebrities’ lives and liking their latest pictures, videos, and posts on Facebook, Instagram, and Twitter? And the relationship between celebrities and their followers can be especially intense and complicated in America’s black community, where celebrities have always had a special status because their success and mainstream acceptance have helped uplift the race.

Black celebrities are heroes, role models, trendsetters, and social activists. But, likewise, their downfall can be seen as a stain on the entire race. The recent controversy surrounding the statements and actions of Kanye West, also known as Ye, illustrates how fraught their lives can be.

Join historian and social commentator Joshua Wright, the host of the NPR podcast “Woke History,” at metrobar dc as he explores the complexity of Kanye West and the duality of black celebrity in America.

Dr. Wright will discuss how the privileged status of black celebrities does not make them immune from the “black tax,” that added cost of being black in America. Nor does their fame make them immune from what scholar W.E.B. DuBois defined as the double consciousness. It carries with it implicit responsibility that can impact decisions about where to live, whom to marry, whom to vote for, and how to use their platform.

Looking back through time, Professor Wright will discuss how, since the early twentieth century, black celebrities have walked a tightrope across two worlds: one white and one black. They dealt with a double burden of being “too black” for some audiences and “not black enough” for others. Regardless of fame, many exceptional blacks in America have experienced this burden at some point in their lives.

Kanye West is no stranger to the pressures of the double consciousness. He is one of history’s most accomplished, complicated, and polarizing figures. Until recently, he was the second wealthiest black person in America, with a net worth of over $2 billion. Moreover, he has impacted American popular culture and zeitgeist more than most entertainers of his generation. All of this makes his recent downfall and abrupt “cancelation” by fans and corporate America so fascinating.

Dr. Wright will situate Kanye West’s narrative within a broader historical context of trailblazing black celebrities who preceded him in the 20th century. He will analyze the role that West’s family and his hometown Chicago played in shaping his worldview. Finally, Dr. Wright will look at the manifestation of double consciousness in Kanye’s politics and spirituality and how he compares to his famous black contemporaries in this post-Obama, Black Lives Matter era. His talk will give his audience a chance to be part of the nuanced conversations on race and celebrity sparked by the critique of Kanye West offered in his book. (Advance tickets: $12. Door: $15, or $13 with a student ID. Listed time is for doors. Talk starts 30 minutes later.)